Palindromes: Our Best Math Lesson Ever!

SA and I did this math activity together last term, and I've been intending to share it ever since. It was the best week of math we've ever had. I could see and hear the learning happening, and we both enjoyed every minute of it. We worked away at it every day, and often SA would ask to just do a bit more after our 10 minutes was up.

I have to be honest and tell you that I didn't put a lot of thought or planning into this lesson. I opened up one of my math game/activity books as I do every Monday morning (in this case Family Math). The purpose of the activity was to provide "many hours of highly motivated addition practice." Because SA had just learned how to add and carry, I thought it might work for us. So I printed off 100 Charts for SA, JJ, and myself (though I noticed, revisiting it, that Family Math called for a 0-99 Chart. It will work either way.). 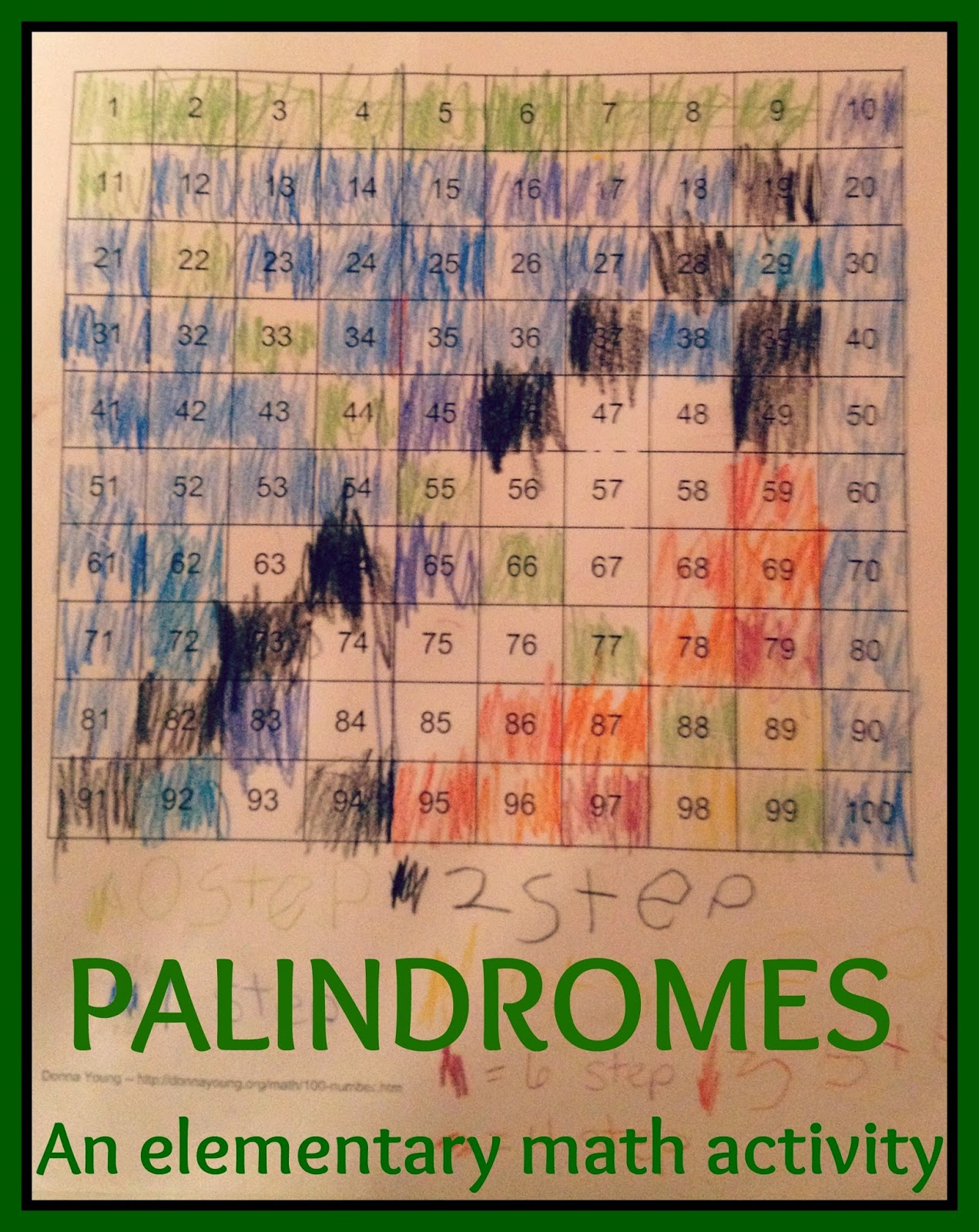 Next, we started to turn the non-palindromes into palindromes. We flipped the numbers and added them together. For example, we added 12 + 21 = 33. Aha! A palindrome. That one just took one "flip and add." We coloured the "one-step palindromes" with a second colour, and started making a colour key at the bottom of the page. Some numbers took longer: 19 + 91 = 110, 110 + 011 = 121. That was a two-step palindrome. There were even a couple that we didn't solve (I'll let you find them. You're welcome.). We ended up making a separate colour for numbers that still hadn't turned into palindromes after ten "flip and adds." After a while we started to see an interesting pattern on our pages.

We did not duplicate each other's work, even though we each had our own pages. SA would figure some of them out, and I'd figure others out, and then we'd both colour our numbers according to what the other person figured out. JJ (3) would just copy our colours.

A little later, I noticed that 12 + 21 = 21 + 12. (In other words, we should be able to colour them the same colour without doing the sum all over again.) I tried and tried to get SA to notice this. If he added up 23 + 32, I would add up 32 + 23 beside him. But he did not get it, even when I drew lines between them to connect them. Then suddenly, two days later, he suddenly found it himself, and he was so excited about it. I had to laugh. 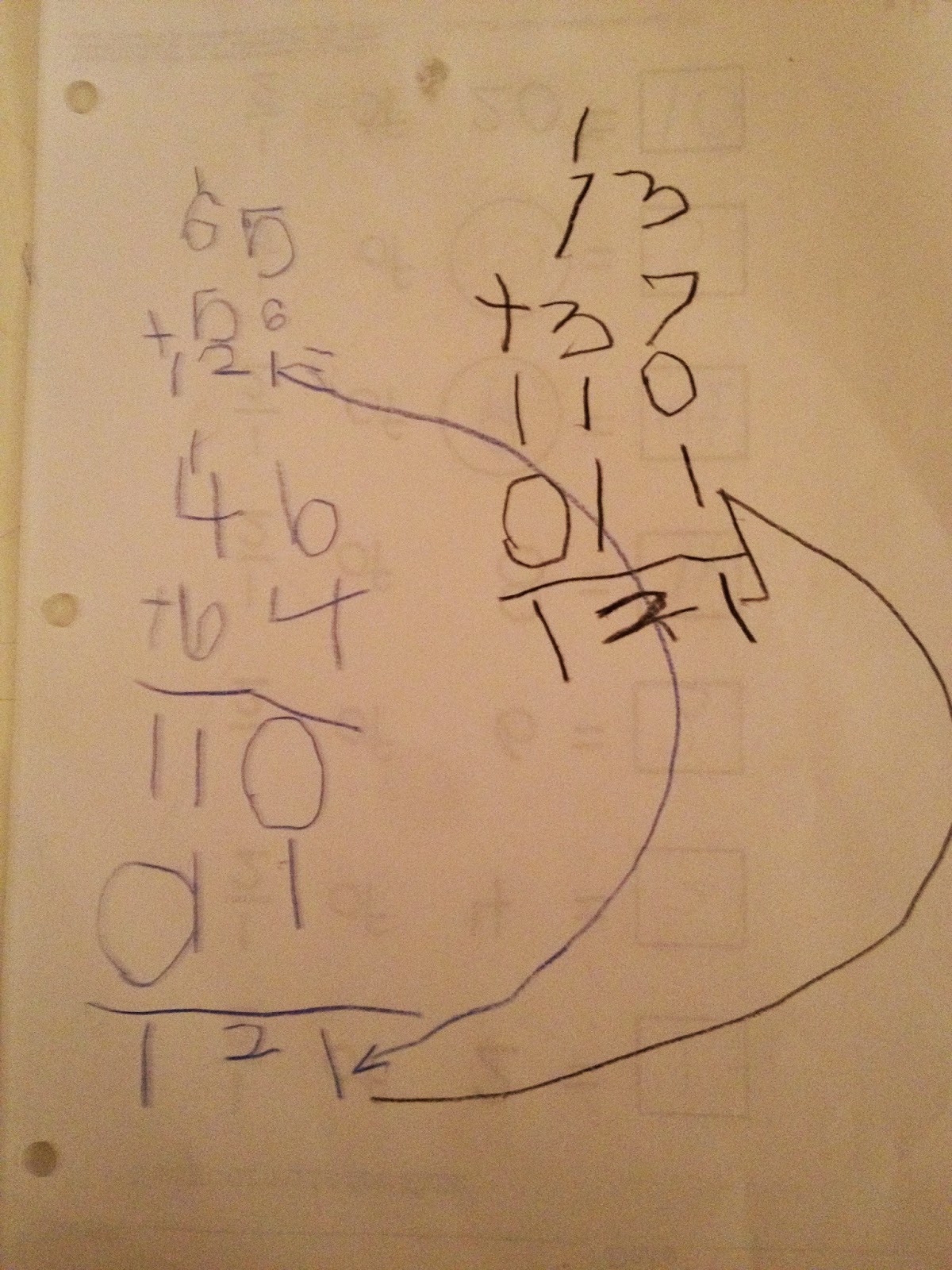 Today, while I was writing this post, he said "44 is blue and green." In other words, according to his colour scheme, 44 is both a zero-step palindrome and a one-step palindrome.

I think you can see by now why I thought this was our best math lesson ever.

- SA was completely engaged. Each addition problem was not "drill and kill"...he was genuinely interested in what each sum would be and whether it would turn out to be a palindrome.
- This was a long project that he had to persist in to find the pattern. I sometimes worry he doesn't have enough opportunity to build persistence in math, since it often comes so easily to him.
- It gave him a chance to explore and make his own connections in math. I know that any discoveries that come to him this way are truly learned.

I highly recommend this math activity for any child who knows how to add and carry. It will provide lots of practice, and may pave the way for some real math discovery!
Posted by Education is a Life at 1:53 PM