The Story of Canada (times four!)

...And Other Spines to Study Canadian History in Early Elementary

I have been trying to decide on a Canadian history spine for SA(7). In a Charlotte Mason education, "spines" are often used to go through the chronology of history. These spines may be gone through slowly, over several years, and supplemented with biographies, first-hand accounts, and other living books. Spines have a little more in common with textbooks than you'd expect a Charlotte Mason homeschooler to use, but the difference is that we look for a narrative style. Above all we avoid dry summaries of fact, instead looking for ideas and details that stimulate the imagination.

These two identically-titled books are the ones I'm considering right now. 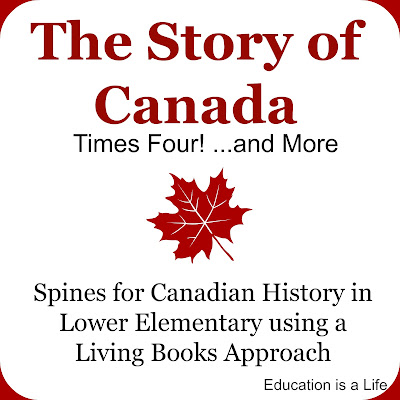 The Story of Canada by E.L. Marsh


This popular history of Canada is well-written, full of the details that capture the imagination. It was published in 1913, so it is in the public domain and you can find the full text online. Because of its age, you may expect that you will have to discuss some terms and some matter-of-fact attitudes about First Nations that would not be deemed acceptable today. Also, it only goes so far... at the end of this book, Newfoundland is not yet a part of Canada, and the Union Jack is still its flag. However, because of Marsh's engaging writing style I think it is worth looking at when beginning your chronology of Canadian history with elementary students.


The Story of Canada by George W. Brown, Eleanor Harman, and Marsh Jeanneret 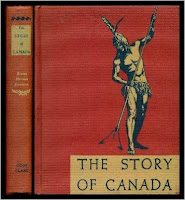 This is another history of Canada in story form, published in 1950. I quote from the Foreward:


"This book was begun in the classrooms which the authors have visited in each province of Canada, from British Columbia to Newfoundland. Frequently, teachers described with enthusiasm supplementary books--most of which were story-books--admitting their inadequacies, but pointing out how powerfully they impressed their contents upon the minds of boys and girls. The usual textbook narratives were, of course, intended to be read and remembered; stories were always read, and remembered."

Isn't that a lovely description of one of the key differences between twaddle (dry textbooks) and living books? The authors go on to explain that this book is an attempt to write history in story form while maintaining its integrity as history. While I have not begun to use this book yet, it does look like they have succeeded.


As I begin to go through Canadian history with my oldest son, I am planning to use both of these books, pre-reading and choosing the best account in areas where they overlap. I think that as I do this, both books' strengths and weaknesses will become clear and I will report back to you on this blog!

There are three books that I've seen recommended here and there that I have decided not to use.

The Story of Canada by Isabel Barclay


While this book is mentioned as an option on the Ambleside Online Canada page. I do not consider it a living book by any definition. Its sentences are short and choppy, and it is very short on detail that might appeal to a person's imagination. I give you a selection from the story of Jacques Cartier:


"It was a terrible winter. The snows came early and it was bitterly cold. There was hardly any food. Even the Indians starved. Jacques Cartier's men fell sick and many died. In the spring the rest sailed back to France."

Compare this to the same story in E.L. Marsh's Story of Canada:


"Cartier and his men made ready for the cold as best they could. But they did not know what Canadian winters are like, and were not prepared for so much frost and snow. The great river was soon frozen over, and the snow lay so deep that it seemed to the French that the earth could never throw off her thick white covering.

As the weeks went slowly by, and it grew no warmer, a terrible disease called scurvy broke out among them. Before they could find anything that would check it, twenty-six of their number died. One day as Cartier was walking near the river, feeling very sad and discouraged, he met an Indian who, but a short time before, had been ill. Upon Cartier's asking him how he had been cured he explained that it was by taking a medicine made from an evergreen tree called Ameda. With hope and joy Cartier hurried back to tell his men. They tried the remedy at once--in fact, they used up nearly a whole tree--and before long all were well again.

At last spring came, the warm winds began to blow, the ice melted away, and the French prepared for their homeward voyage. It was at this time that Cartier did a very wicked thing. He captured Donnacona and four other Indian chiefs, and took them against their will to France. He did this simply because he wanted to show them to the people of his country, and to have them tell the king of the wonders of the New World. They never saw their native land again, but died in a strange country and among strange people. This was the way Cartier repaid the Indians for all the kindness they had shown him during his stay with them."

Barclay's Story of Canada just does not capture the imagination in the way a living book can, and I do not recommend it.


I have to say, I love the idea of this book. From the Preface:


"This is not a book to read all at once. It is a book that might inspire you to a little organized day-dreaming, as you think about what it might be like to be Margureite de Roberval, cast away by a cruel uncle, or Muquinna, facing strangers as alien and powerful as beings from outer space."

I take delight in just reading through the table of contents. Every chapter is a time period, and every time period is filled with the stories of its people. These people are not just white and male. I see many women, many First Nations. There are stories from every area of Canada.

Sadly, however, Great Canadian Lives is not uniformly well-written. I don't know if it's because of its multiple authors, but while some of the biographies are great, others are mere lists of choppy facts. I still highly recommend it as a resource for its table of contents (imagine being able to find living books about all these people!) and for the biographies that are well-written.

My First History of Canada by Donalda Dickie


I have this book, and I think it is a good option as a Canadian history spine for the elementary grades. The reason I'm not using it is that I prefer the writing styles of E.L. Marsh and George Brown, mentioned above. One interesting thing to note about this book is that it omits the War of 1812, so if you use it you might want to cover that another way.

A Book for Later Elementary

The Story of Canada by Janet Lunn and Christopher Moore


Since I've mentioned THREE other books with this title already, I should mention this one too. This is a more contemporary account, and it looks promising. It is aimed at older children than I have right now, though, so I'll refer you to Annie Kate's review at Curriculum Choice. I anticipate using this when we reach the end of the usefulness of the vintage books I'm using, by which time my children will be a little older, and ready for it.

Searching for these books?

I have not included links for these books, as many of them are out of print and must be found used. My favourite way to search for used books right now is using BookFinder.com. It compares prices for you from sources such as Amazon, the Book Depository, Better World Books, and more. Better yet, it includes the shipping to your postal code in the price comparison, so you get a true picture of what it will cost you.

Posted by Education is a Life at 5:05 AM