This term, we have been doing a "math game of the week" together on Mondays. Then we do the same game whenever we feel like it throughout the week. This week's game is from Peggy Kaye's Games for Math. In the book, it's called "Star Count", but since we used beans, we call it "Bean Count." 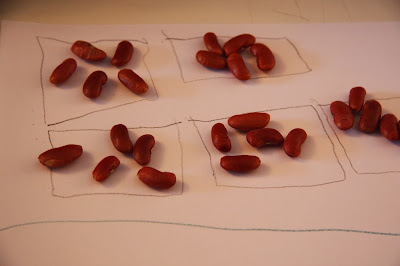 I got out a few papers, the pencil crayons, and a Dice. I divided a paper in two with a pencil crayon and wrote "SA" on one side, and "Mama" on the other. Then we took turns rolling the dice. For the first roll, we made large circles or squares. For the second roll, we put that number of beans in each circle or square. The person with the most beans won that round.
We actually started by drawing stars in the circles, but switched to beans when I noticed that drawing stars was taking more mental effort than the game. We played four rounds. I won twice, and SA won twice. He had the last win, and it was a good one, so we quit while he was ahead.
You can see that this game is meant to get him started thinking about the concept of multiplication. We didn't use any multiplication terminology yet...no "times" or "groups of." I just let him play the game and let him make whatever connections he's ready to make at this time. Later, when we do study multiplication, he'll think, "Hey, I know what this is!"
Posted by Education is a Life at 5:23 AM